As Business Development Manager for EXFO’s Transport & Datacom business unit, Abdullah is responsible for engaging with wireless communications service providers to position EXFO’s high-value solutions within their network test and measurement activities. With deep experience in RF engineering, his areas of expertise include radio access networks (RANs), mobile fronthaul and backhaul technologies. Abdullah has over 13 years of experience in the telecommunications industry having held various positions for Ericsson and other companies. He is a certified Project Management Professional (PMP), and received his B.Sc. degree in Electronics & Communications Engineering from University of Technology, Baghdad, Iraq.

5G is upon us and with it an updated functional architecture and a whole host of new interfaces, protocols and capabilities. Engineers and operators are now faced with a variety of technologies coexisting in the same network, including cutting-edge, current and legacy technologies. And it can be hard at the best of times to navigate this new and complex reality. Here’s a breakdown of what’s ahead.

The NG-RAN consists of two different types of nodes: gNB and ng-eNB (new generation evolved Node B). The gNB is the actual new 5G base station, whereas the ng-eNB is an evolution of the former LTE eNB.

The air interface between the gNB and user equipment (UE) has been named the new radio (NR). However, the interface between the ng-eNB and UE remains the same as in LTE, evolved universal terrestrial radio access (E-UTRA). The gNBs and ng-eNBs are connected to one another via the new Xn interface, where the Xn application protocol (XnAP) is defined. Then every node is connected to the 5GC by the NG interface, with its associated NG application protocol (NGAP). As in LTE, the RRC protocol is used to manage the connection between the gNB and the UE.

Thanks to cloud RAN architecture, the gNB is split into one central unit (CU) and one or more distributed units (DUs). The CU provides high-level processing functions, such as radio resource and dual connectivity management, whereas the DU controls functions like the physical layer. Both units are connected via the F1 interface.

The new 5GC is a service-based architecture in which different network functions (providers) offer services to other NFs (consumers) through interfaces. The NFs can be placed at specific locations to fulfil certain latency requirements. This allows operators to deploy and adapt the network according to their needs.

This network structure is a cloud-native, programmable, modular architecture designed to create multiple logical networks (or slices) running over the same physical or virtual resources. This design responds to the different network requirements of the different use cases. The technology behind this architecture is network functions virtualization (NFV) and software defined networking (SDN). The interfaces between NFs will be based on application programming interfaces using the HTTP/2 protocol.

5G could be seen as a revolution when comparing latency, throughput and capacity requirements with today’s 4G performance. Although some of the features used within 5G are the culmination of continuous improvements to 4G networks, many new disruptive technologies will be introduced. 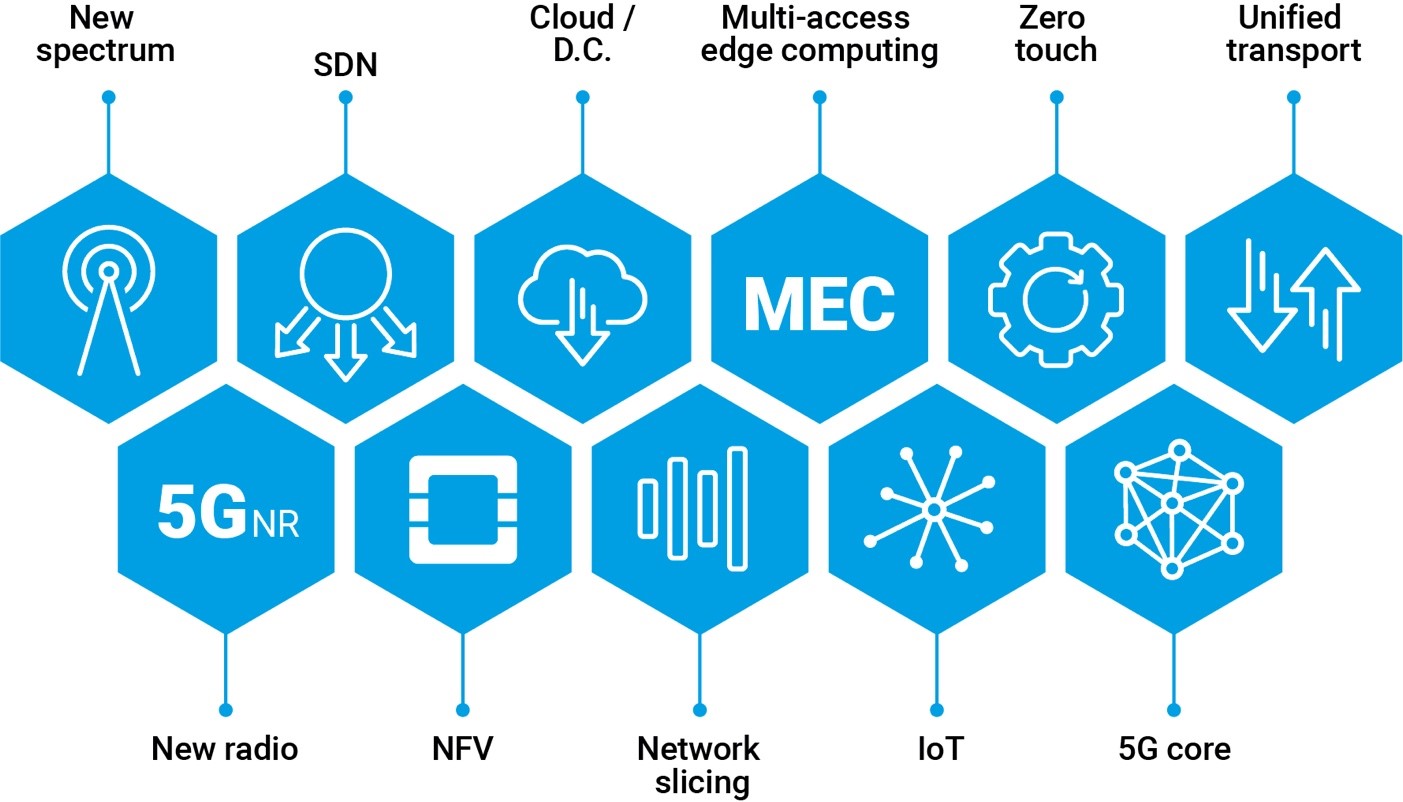 The December 2017 Release 15 NSA specification defines the E-UTRA - NR dual connectivity operation, whereby a UE is connected to one eNB acting as a master node and one en-gNB acting as a secondary node. The en-gNB is a node providing NR user plane connectivity to the UE and might be connected to the evolved packet core (EPC) through the S1-U interface. The eNB is connected to the EPC via the S1 interface and to the en-gNB via the X2 interface. Dual connectivity not only increases user throughput, but also allows load balancing between nodes while providing seamless and robust mobility. 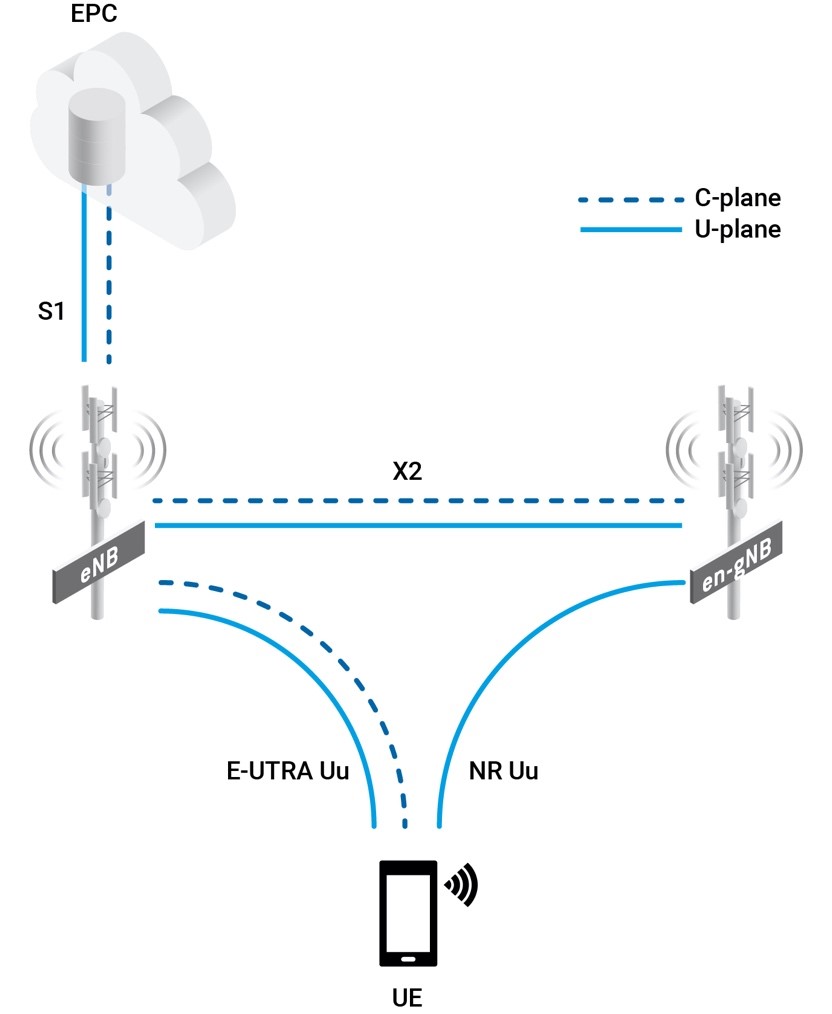 In 5G, not all traffic is equal. Mobile operators must be able to match different services with different levels of access—a concept known as network slicing. Many critical applications, such as autonomous vehicles and remote surgery, will demand prioritized 5G “slices” to guarantee a secured continuous service.

The network will be sliced into multiple virtual networks running on a common network infrastructure, each with its own set of characteristics. A network slice is composed of a RAN and a core network with either physical or virtualized functions.

Multiple-input multiple-output (MIMO) aims to increase the number of transmitting and receiving antennas (TX/RX) to have more signal paths and achieve gains in spectral efficiency. This would make it possible to provide higher capacity within the same spectrum.

While conventional MIMO, as defined in LTE, uses few TX/RX antennas, 5G goes further with massive MIMO by using dozens or even hundreds of antennas (arrays) at the same time. Massive MIMO is expected to be used in the new millimeter-wave frequencies, with rectangular antenna arrays in both the base station and the UE.

The 5G network architecture will support multi-access edge computing (MEC) technology. MEC provides cloud-computing capabilities running at the edge of the network (gNB), taking advantage of the low latency and high bandwidth provided by 5G. It is expected that MEC will foster the creation of innovative services and use cases such as video analytics, location services, augmented reality, data caching and optimized content distribution.

The evolution from 4G to 5G in the transport network:

The introduction of 5G promises to deliver new capabilities and new technologies that include the use of higher radio frequency (RF) bands to support additional bandwidth (mmWave), faster and more efficient fronthaul connections (eCPRI), more reliable and cost effective timing provided over the network (IEEE1588/PTP) and more granularity in the distribution of network functions (CU, DU, RU)—to name a few.

The 3GPP 5G RAN architecture introduces new functional splits of BBU elements. The new architectural model is designed with a functional separation between CU, DU and RU, each characterized by a different demarcation point between the centralized and the distributed units and with the new link between the CU and the DU referred to as midhaul. Various functions can then be performed by the CU, DU or RU, depending on the desired throughput and latency requirements and expected performance. Splitting network functions between CU, DU and RU requires the definition of an additional standard for interconnecting these devices. Just as the splitting of RRH and BBU functions introduced the use of the CPRI protocol, the new functional splits introduce eCPRI and F1, both based on Ethernet technology.

Although CPRI has been the main fronthaul interface standard, it will not scale well for high bandwidth 5G use cases. To improve the throughput of the fronthaul connection, there is an industry-wide shift towards eCPRI—a packet-based fronthaul interface that uses Ethernet as its physical layer and runs over a fiber-to-the-home (FTTA) connection. This provides faster link rates of 10 Gbit/s, 25 Gbit/s and up to 100 Gbit/s, as well as more efficient use of fronthaul bandwidth. eCPRI employs a flexible functional split inside the physical layer (PHY) that keeps most of the functionality in the baseband unit.

The midhaul and backhaul will see the introduction of new transport technologies including OTN and FlexE. With varied technology choices offered by network equipment manufacturers (NEMs), the pressure is on for operators to choose the right architecture today that will support tomorrow’s services. Again, continuing to support 4G for a number of years means that different types of traffic (4G/LTE and 5G) delivered via network slicing will have to smoothly coexist in the transport network and that their respective SLAs are met.

NFV is a key enabler for 5G using the technologies of IT virtualization to virtualize entire classes of network node functions into building blocks that may connect, or chain together, to create communication services. 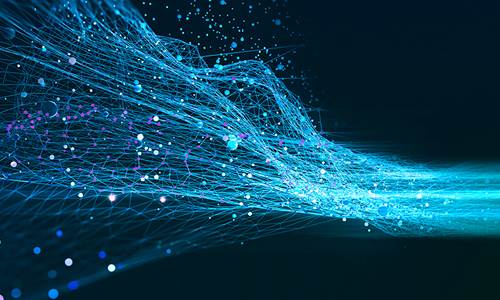 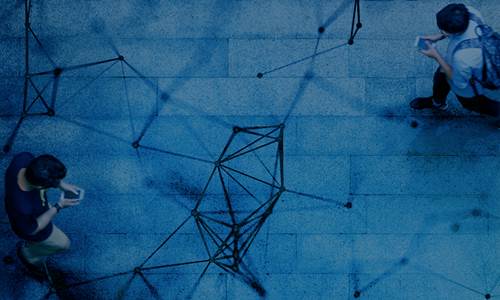 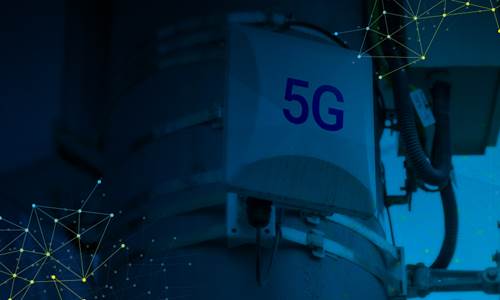